Kansas, a landlocked US state more than 1,700 km from the sea, is not the easiest place to find a wealth of knowledge about sushi, Japan’s most iconic food. But Eric Rath teaches Japanese cultural history at the University of Kansas and his new book “Oishii: The History of Sushi” (oishii is Japanese for “delicious”) is an appealing title for one of the first important books written in English on the history of sushi.

Rath begins by asking “What is sushi?” That’s a good question, because most of us have our own idea or images of sushi. But it turns out to be deceptively difficult to define, and the author does not respond directly. Instead, he examines two Chinese characters for sushi found in ancient Chinese dictionaries. The first character, in a reference dating back to the 3rd century BC. In modern Japan, the two characters are used interchangeably.

Japanese dictionaries, on the other hand, say that sushi is a Japanese food made up of two components: chari (sweet and sour rice) and net (a garnish, often fish but sometimes vegetables, eggs or meat). But the answer is not here. After a thorough exploration of the origins of sushi, Rath makes a surprising revelation, at least for less savvy sushi lovers. Sushi, he says, did not originate in Japan but somewhere in the rice growing regions of Southeast Asia as a way to preserve fish. It is not known exactly when sushi first arrived in Japan, although there are historical records showing that the Japanese made it in the ninth century.

â€œOishiiâ€ is not a cookbook, but Rath includes a number of historical recipes showing how sushi could have been made in earlier times. today funazushi (carp sushi) is often cited as the closest thing to the so-called original narezushi (ripe fermented sushi). Funazushi is a regional specialty from the district around Lake Biwa, Japan’s largest freshwater lake, in Shiga Prefecture. It is made with crucian carp (funa) from the lake, which is salted to remove moisture before being packed in a wooden stripping barrel in cooked rice with a heavy stone weight on top.

Rice is there to feed the natural bacteria that convert rice starch into glucose and create lactic acid to ferment the fish. Fermentation can last three months, six months or even three years. In the end, the fish doesn’t look, smell and taste like sushi you find in London or New York, or Tokyo for that matter. The strong-smelling fish is cut crosswise into thin slices and served with separately cooked rice, as the rice used for marinating has dissolved and drained during the long fermentation process. 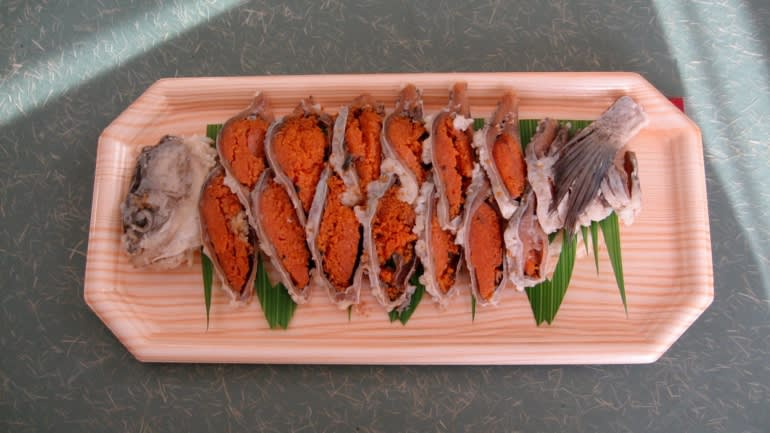 Above: Blowfish and other types of sushi are on display at a market in Shimonoseki, Japan, in February 2020 (Reuters). Low: Funazushi (carp sushi) is often cited as the closest thing to the so-called original narezushi (ripe fermented sushi). (Courtesy of Reaktion Books)

During the medieval Japanese period, between the late 12th and 16th centuries, sushi changed from a marinated fish to a rice dish called namanarezushi (fresh matured sushi). Against the backdrop of sushi’s long and intriguing history, the appearance of namanarezushi was revolutionary, as fish and rice were eaten before they were fully fermented and were ready in weeks instead of months or years.

If the author had shed light on the new samurai culture and the warrior way of life, we would have better understood the meaning of namanarezushi. In particular, frugality was one of the virtues of the samurai, rice was precious, and wastage was discouraged. Samurai sword skills seeped into specialist knife masters, who carved and presented fish or game birds in a highly formalized artistic way as sashimi at banquets. The knife ceremony, reminiscent of Japanese Noh theater performances, can be seen on YouTube. 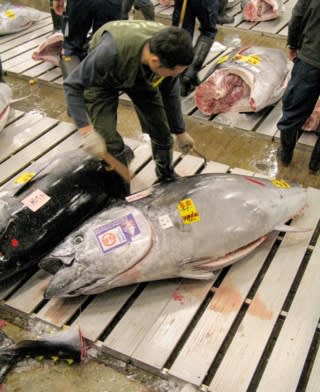 Arguing over a tuna at the Tsukiji fish market in Tokyo. (Courtesy of Reaktion Books)

Opening chapter three, the author declares that the Edo period in Japan (1603-1867) was “a golden age for sushi innovation”. Many new styles of sushi have been developed including, most significantly, hayzushi (quick sushi).

Here, Rath could have paid more attention to the centrality of rice. The powerful and highly organized Tokugawa shogunate in Edo, now called Tokyo, placed farmers second in the social class hierarchy after the samurai and ordered them to boost the production of rice, which has become an important alternative currency. The country’s economy revolved around rice, with the wealth of each feudal lord being measured by the annual rice production of his estate, which was taxed accordingly. The Japanese like to say that the imperative of rice cultivation has helped forge the hardworking character of the nation.

The increase in rice production indirectly led to the birth of hayzushi, as rice-based ingredients such as rice vinegar, sake, and sake lees became widely available. As the name suggests, hayzushi is quick to make. Instead of waiting for lactic fermentation, rice vinegar or sake lees were added to the rice, speeding up production and leading to the invention of new styles such as makizushi (rolled sushi) and inarizushi (stuffed sushi in sachets of fried tofu). But the most spectacular new invention has been nigirizushi, a hand-formed sushi also known as Edomaezushi, (Edo style sushi). An illustrated assortment of sushi from the Meiji period. (Courtesy of Reaktion Books)

Credit for inventing (or perhaps just popularizing) nigirizushi goes to Hanaya Yohei, who threw away the box used to shape the sushi, instead of squeezing a slice of Edo Bay fish directly onto it. small mounds of vinegar seasoned rice. Nigirizushi quickly became a favorite late night snack, a 19th century fast food restaurant for the male population of Edo that was consumed at street stalls.

The history of sushi after the start of the Meiji period in Japan in 1868 does not change so much in the recipes as it does in how sushi evolved from a quintessential late-night street snack to a restaurant food of luxury. Nigirizushi and makizushi became the most recognized styles of sushi nationally after WWII. Sushi making has become more professional, and at the same time, the introduction of conveyor belt sushi has made sushi cheaper and more widely accessible. The popularity of the dish has reached far beyond the coast of Japan. In 2007, Sukiyabashi Jiro restaurant in Tokyo became the first sushi restaurant to receive three stars from the Michelin group based in France.

By examining the current state of sushi as a global cuisine, the author analyzes its impact on the health of humanity and the planet. In the process, it raises a lot of uncomfortable questions including the sustainability of fishing and even suggests using certain apps that tell you how a fish was caught. Above: The introduction of conveyor belt sushi has made sushi cheaper and more widely accessible. (Reuters) Bottom: then Japanese Prime Minister Shinzo Abe, third from right, and then US President Barack Obama, second from right, meet in 2014 for a “sushi top” at Sukiyabashi Jiro in Tokyo, the first sushi restaurant to receive three Michelin stars. (Courtesy of Reaktion Books)

In the concluding chapter, he delves into the future of this remarkable cuisine that has evolved from an ancient technique of preserved fish to a popular late-night street snack in the Edo period, and a cuisine contemporary world that comes in many different styles. Sushi, like all cuisine, is not static and will continue to evolve, he says. In a final post, he notes that if we hope to continue enjoying sushi, it is important that we make our choices wisely.

â€œOishiiâ€ is extensively and extensively researched, using many sources of historical and current data, and is full of fascinating and often fun anecdotes told in a light, non-academic writing style. If you’re craving lesser-known and intriguing details of sushi history, then this is a book that will feed your hungry mind.

Kimiko Barber is a London-based author of cookbooks including â€œSushi: Taste and Techniqueâ€ (with Hiroki Tamemura) and essays on Japanese culture and cuisine.